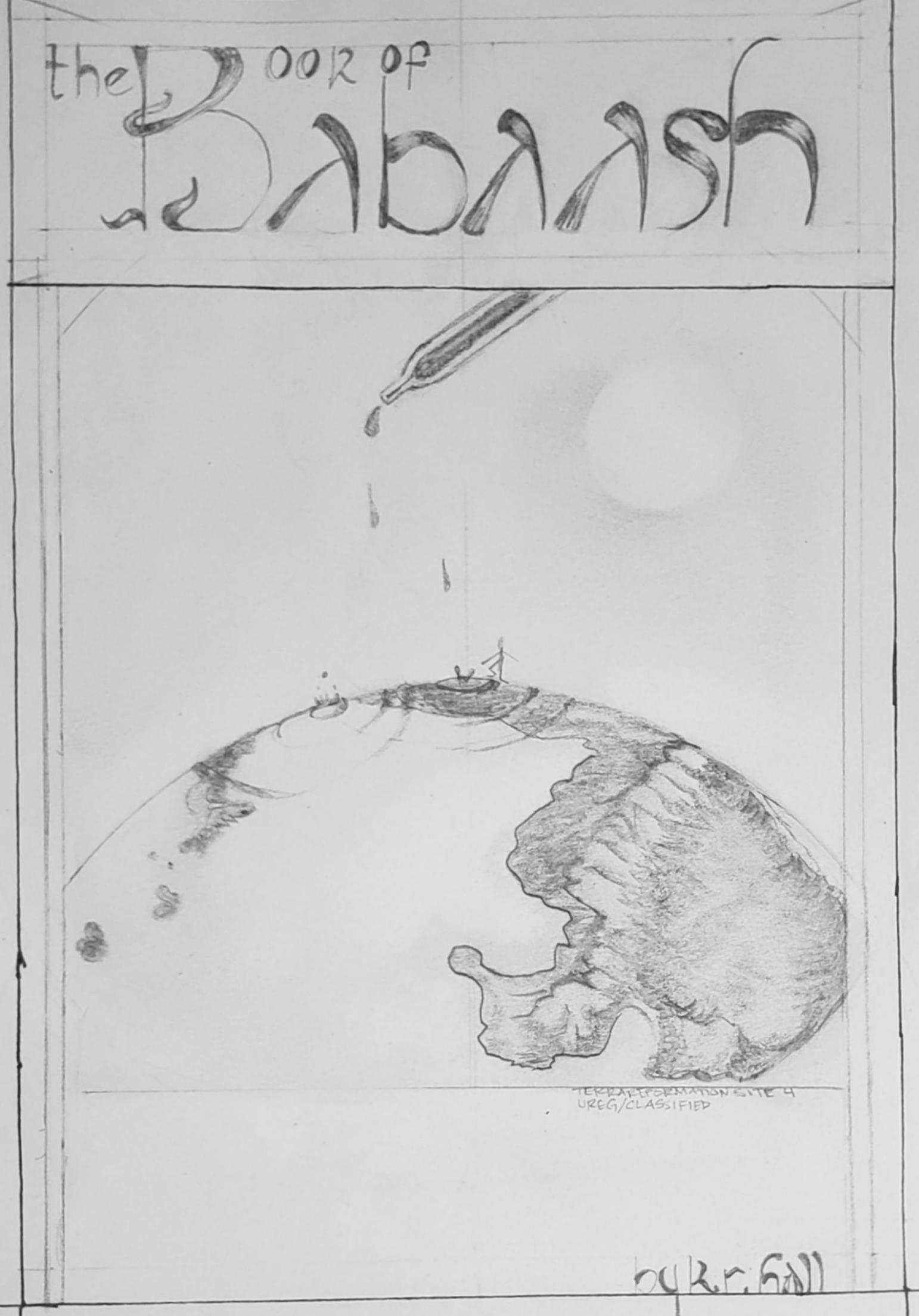 Dr. Audrina Babish listened to the breath of machinery when she flipped the lab power switch. Everything visible was dull chrome and pristine glass; antiseptic in aesthetic and being. Today, she felt uneasy; it was too clean, too wired, and recently, too aware as she passed the quick-mount cameras. It was void of anything resembling her teams’ work on the Human Regeneration Project; no life. No constructive chaos. She breezed through the next hallway. The Genetic Restructuring Department was free of most of the surveillance that cobwebbed the science area.

The lack of high-pitched hum made her relax her shoulders. She ran a hand over the T.R.P. poster lining the end of the hallway; a cartoon rendering of The Terra-Reformation Project. An international effort to colonize a new earth-like homemade many stars away. Well, at least that’s what it was when rallying first started for real efforts to save the last of humanity. She repeated the official tagline in her head, picturing it in shiny gold letters just as sanitized as everything else about it.

The journey was the last effort to make the most of the fuel synthesized on Earth for the 201 light-year journey through space. Pollution, nuclear disaster, disease, and war had ravaged the once watery planet; this venture and its accomplishments determined the future of almost every species on earth. A new start seemed within their grasp after the 200 years of dedicated research aboard the Cradle.

Launch Day was only 10 days away. On paper, at council meetings---they had done it. The specimens were coming along nicely and the plants and animals had flourished as expected. The Human Regeneration Project fell under the T.R.P. This group was the real miracle aboard the unique ship. They’d cloned and educated relatively healthy human subjects on schedule. The Cradle of Life in practice.

The director of Genetic Coding was Zach Jusrah, one of the rare minds she'd snagged right out of primary training. He was born aboard the S.P.E.S. Cradle in 2308. Many of the children born to the original 3,000 crew in 2140 had heavily corrupted DNA from their parent’s time on Earth. As a result, UREG placed breeding restrictions on anyone who didn’t submit to screening; hundreds of newborns were eliminated. Dr. Jusrah was one of the few that survived and excelled as the last of humanity hurtled through space. She liked the kid, but he was working too closely with the military presence on the cradle. Too naive, coddled from all that status. Dr. Babish wasn’t so lucky. Her bones ached as much as someone twice her age serving as a constant reminder of her genetic inferiority. Despite that, he was still a trustworthy human being, a brilliant geneticist, and a problem solver. No one could fake his kind of genius.

The walls here framed glass tubes containing a range of early specimens produced in the HRP. Dr. Babish had once thought it macabre; now it was reminding her of how far they’d come. Dr. Zach Jusrah had his feet on his desk, thumbing through an ancient-looking book on ethics in the far reaches of his dark workspace.

“Ethics? You should put that down. It’s useless to you now.” She chortled a little as he swung his feet off of his desk in surprise. He stood at once to his full height of 198 centimeters, nearly tripping over his chair. “Relax. I wanted to talk to you privately, do ya have a minute? I wanted to ask you for a favor.” He squinted at her suspiciously. “It’s a little unorthodox, but I need the genetic restructuring sequences you worked on for Kilru.” She asked quickly.

“Dr. Babish, we’ve been over this! I can’t, I’ve been sharing too much information with the civi-science department as it is!” He pleaded with the stately looking older woman.

“Stop! Just stop for a moment. I need you---” Dr. Audrina paused when she heard the beep from the keypad outside. Dr. Paolo Crea breezed in with his grungy lab coat flapping behind him. He plopped down a pile of classified-looking folders on his desk. They slid atop the many other folders stacked there.

“Dr. Babish, how are you? Good, I hope. Good…what do you need?” Dr. Crea rattled off a greeting in his own dismissive way. He was almost chipper as he gnawed on a browning apple.

“Better now I know you are in such a good mood, Paolo. I’m glad you’re here.” She complimented as nicely as she could.

“Whatever it is Babish, it’s no! I don’t wan’ any more problems from the T.R.P. police, you got that straight!?” Dr. Crea sat down and squinted at Dr. Babish. The T.R.P. as a whole became insufferable; on top of the restrictions already in place to keep unauthorized genes onto Terra Novae, new restrictions and supervisions were added. Uprisings among the civilian corps were increasing.

“Trust me, I know I’m drawing a lot of heat. But trust me I can convince you.” Dr. Babish took out her little blue notebook. “I talked to Dr. Mullen--” She almost whispered the name.

“See! T.R.P. police!“ Dr. Crea shouted. Brittany Mullen had a reputation for sussing out those who would endanger the ‘genetic purity’ of the project. A stickler for red tape.

“Shutit! Just listen! I talked to Dr. Mullen. She’s telling me that 4 out of 8 ethics committee heads are being replaced by Kilru-aligned board members. Combine that with him breaking up our department and commandeering almost half the science department--” She recited the troubling numbers as if to push it through their doubts.

“Dr. Babish, we volunteered, he’s allowing us so many applications now, you don’t think all of that is entirely on purpose, do you?” Dr. Jusrah started his protest, the first time in their professional career.

“You shut it too! I said listen, didn’t I? Are you two through?” Dr. Babish gave a strained look and continued.

“Look, I understand your reasoning for pursuing other projects close to the landing date, but you need to think about the possibility that the General means to overtake the T.R.P, maybe even the S.P.E.S. Cradle. LISTEN, please!

Ethics Committee, 4 out of 8, Science Dept. 2 out of 10, Synthetic Tissue Development, All thirteen of them are working for him now, Terra Formation Department, four out of six with one facing a court-martial that seems pretty freakin’ bogus if you ask me…” She shot off the notes she gathered. “Here’s the thing…none of them resigned willingly. They were all conspirators in this scheme or that. Eric Tor was on each of these councils, too.”

“Tor? He’s in the Atmospherics Dept...not Ethics or even the Flight Team. Why the hell is he there?” Dr. Crea asked.

“I mean, they offered Dr. Crea and me the opportunity to work with no crazy court-martial type things happening.” Dr. Jusrah thought hard, trying to reason a way out of the alarming situation.

“I want you to stop me if any of the following is untrue. First, the two geneticists he had replaced were working with samples 13 and 14. Those subjects are unaccounted for but still cleared in the database. I imagine the sequences he has you reworking are from those missing subjects, Jusrah, yes?” He thought on it hard but said nothing.

“Second, people like you two are essential to what I think he’s working on. You have the clearance, the knowledge base. That’s why he offered you a position instead of finding crimes to accuse you of. The others I listed off was essential in terms of permissions needed to make what you’re working on happen. No need to keep them happy long term.” The two scientists looked at each other and then to Dr. Babish.

“Third, Dr. Crea, he’s asked you to check the compatibility of this one's work--” She pointed at Jusrah, “---with the new information from biome readouts, right?” Dr. Crea frowned deeper, unable to negate what she was saying.

“I bet you noticed the gene labels were weird too? Like they were changing it around so they couldn’t be tracked? A military label. C’mon, Dr. Crea, you figured it out didn’t you?” Dr. Crea remained silent. “I thought so.” She finished.

“Wait, I’m confused. Dr. Crea... why are you checking my work, I thought you were working on biome markers for the launch?” Dr. Jusrah asked.

“He’s checking your work to see if the changes the General made to 13 and 14 were compatible with the latest readouts from Terra Novae. The plants and animals have become genetically unstable, they pose a higher threat to the specimens.” Dr. Babish concluded.

“I was...and am, checking your work, son. Genius or not, the rapidly changing environment down there is hard to work around. Our specimens wouldn’t have an easy time …” He dropped off for a second drawing a connection somewhere. "But I didn’t think of something just now until you reminded me...The workup we authored on MAOA 4, Kilru had him work through sequences related to that. You remember, the last project we worked on together before the switch. He was restructuring the MAOA I gene, from the original man samples.” Dr. Crea looked through the cluster of papers closest to him.

“Our study on decreasing the aggression found in non-primitive samples?” She asked as she pulled up her own chair now. He pulled out a sheet.

“Uh-huh, the very same. The key to fast prenatal apoptosis.” Dr. Babish nodded. The disruption of this aggression gene through increased tyrosine ingestion made for unstable mental phenomena starting as early as 600 A.D. It was one of many environmentally mutated factors the team reverse-engineered to a more stable level in the specimens.

“This is the subject I believe to be 14. He has the MAOA II we designed to lessen its impact on aggression and shock as it pertains to adapting, that’s the same with all the Gen twos, but---” He pulled out another sheet. “I pulled this from egghead’s work over there and he sped up the prenatal process while increasing the fight response with minimal cardiac effects.” Dr. Jusrah leered at him as he snatched the sheet to review it.

“I wrote numbers. Somewhere in here,” She flipped some more. “The Kingpoint Gene increased PNMT expression---”

“Yes, that why I asked you for whatever sequences you worked on. Dr. Mullen and I...we think he’s creating genetically enhanced soldiers from our specimens. After the last recon visit, he thinks we have a better shot turning our last hope into a military nightmare. And you two are helping him do it whether you know it or not.“ Her voice betraying her typically lax expressions.

“Give her the sequences, Dr. Jusrah.” Dr. Crea exhaled in disappointment; not in Dr. Babish or the kid, not with the General even. He’d suspected the General was doing something unsavory as launch day neared, but it wasn’t until Dr. Babish revealed the changes to the faculty he pieced together what he was doing. He'd trusted her judgment for most of their career. The disappointment lie in himself. Dr. Jusrah looked equally as guilty as he handed over the red file folder to Dr. Babish as she turned to leave.

“Dr. Babish, I think you should know, he’s had me scan his sequences, too. Like I did for the educational immersion process.” Dr. Jusrah rose to stop her.

“Who? Crea?” Dr. Babish swiped her key-card with a quizzical look.

“No. General Ninesh Kilru. It's ready for processing.” He said flatly. Dr. Babish raced from the Genetic Restructuring Dept.